According to an encouraging UN-backed report, the ozone layer is on pace to regenerate within four decades, with the worldwide phaseout of ozone-depleting chemicals already benefiting climate change mitigation efforts.

The assessment report of the Scientific Assessment Panel to the Montreal Protocol on Ozone Depleting Compounds, released every four years, has indicated the phase out of approximately 99% of ozone-depleting substances is having a positive impact on reducing the depletion of the ozone layer. The report is being heralded as a signal co-ordinated global efforts can be succesful in impacting climate change.

The Montreal Protocol is a landmark global agreement to maintain the Earth’s ozone layer by eliminating depleting substances. If present policies are maintained, says the report, the ozone layer is predicted to restore to 1980 levels (prior to the emergence of the ozone hole) by 2066 over Antarctica, 2045 over the Arctic, and 2040 for the rest of the planet. Variations in the extent of the Antarctic ozone hole, notably between 2019 and 2021, were mostly determined by meteorological factors. Nonetheless, the Antarctic ozone hole has been gradually shrinking in size and depth since 2000. 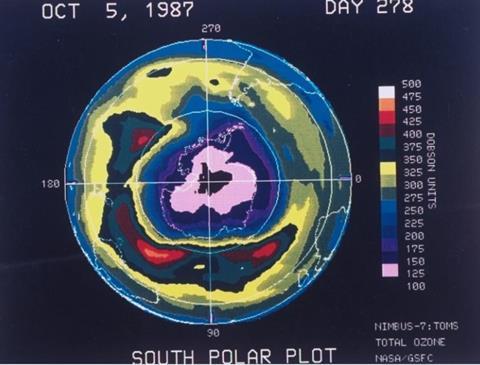 “That ozone recovery is on track according to the latest quadrennial report is fantastic news. The impact the Montreal Protocol has had on climate change mitigation cannot be overstressed. Over the past 35 years, the Protocol has become a true champion for the environment,” said Meg Seki, Executive Secretary of the United Nations Environment Programme’s Ozone Secretariat. “The assessments and reviews undertaken by the Scientific Assessment Panel remain a vital component of the work of the Protocol that helps inform policy and decision makers.”