A new model of hydrogen-powered double decker bus was rolled out in Aberdeen in 2021, following an £8.3m grant from the EU and Scottish Government. These buses have now travelled more than one million miles, preventing 1,700 tonnes of CO2 emissions being released into the atmosphere. This is a great example of successful decarbonisation of local transport, but what steps need to happen next to seize this opportunity and expand the growth across the UK, Europe and ultimately the world? 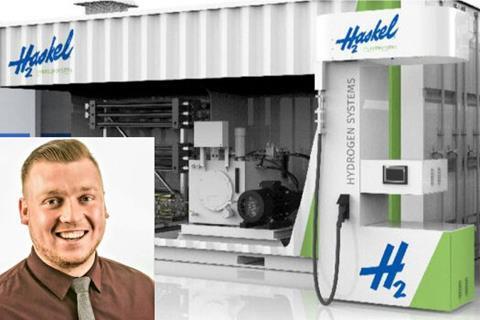 Let’s look at the infrastructure that’s required to make this happen, as well as the challenges and opportunities that lie further down the road. First of all, local authorities and transport providers should recognise that there’s an opportunity for buses and HGVs to share refuelling facilities to spread the cost. Put simply, a single station to serve one council just won’t be cost effective.

The two vehicle classes work at the same pressure (350 bar) so it makes sense for them to use the same refuelling station. These stations could also serve agriculture, highway maintenance, refuse and gritting vehicles. Glasgow city council recently bought a fleet of ULEMco hydrogen fuelled gritters that will be keeping the roads free of snow and ice for the first time this winter.

The second point to consider is the total cost of ownership of any station, which is closely linked to how heavily it’s used and is another reason why offering dual-pressure infrastructure makes commercial sense.

Before investing in new refuelling infrastructure, station owners need to carefully consider how much demand is likely to be put on their station, because that will have a direct impact on operating expenditure. If the station isn’t regularly used to its optimum capacity, then the station’s operational expenditure (Opex) will be high.

We’ve recently seen this misjudgement have a negative impact in the south of England where a major player in the hydrogen industry has been forced to close three of its refuelling stations due to a lack of demand and current technology surpassing that provided by those stations. Footprint can also prove a major oversight, meaning the original footprint often no longer supports the number of refuelling stations agreed upon.

There’s now added impetus and opportunity to get this right. The UK government’s ‘10 point plan’ for delivering a green industrial revolution announced ambitious new funds and policies to grow hydrogen transport. Notably, this will make £240m available for government co-investment in production capacity through the ‘Net zero hydrogen fund’.

Crucially, this opens the door to a hydrogen business model to encourage private sector investment, bolstered by plans for a revenue mechanism to provide funding for the business model. The ‘10 point plan’ made hydrogen a key pillar of its Net Zero Innovation Portfolio, a £1 bn fund to accelerate the commercialisation of low-carbon technologies. So there’s now a huge opportunity for local authorities and transport providers to take advantage of the government funding that’s available and commit to providing a low-carbon alternative to traditional fuel. By providing dual-pressure hydrogen refuelling stations for both buses and HGVs, and ensuring that those stations are regularly used to their optimum capacity, councils and their partners can help to decarbonise local transport services while encouraging other businesses and residents to consider switching their vehicles to sustainable fuel.