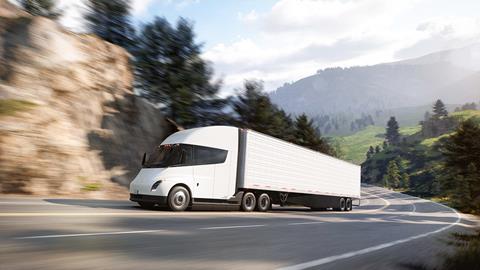 Tesla Semi deliveries begin in the U.S. after 4-year delay

Tesla CEO Elon Musk announced the Semi in November 2017. Even though deliveries started in North America half a decade later, in December 2022, the electric truck still seems like a novelty, mainly due to production delays and unsatiated curiosity among interested parties regarding its real-world performance.

Unlike traditional diesel trucks with flashy radiator grilles, the Tesla Semi packs a clean single-cab design with a subtle lower air intake to cool the battery. The key identifying element is its large wraparound glass that sits flush with the frunk and the doors, lending it a drag coefficient of 0.36—impressive even by supercar standards—positively impacting its range.

The Semi comes in a 6X4 tractor layout, with a single axle upfront and dual axles at the rear, under its trailer bed and tow hitch.

The Semi’s cabin is as attractive as its exterior design. For starters, Tesla says the central driving position and large glass area enable improved road visibility. It also has a car-like steering size and two large touchscreens with similar features to the brand’s passenger cars. 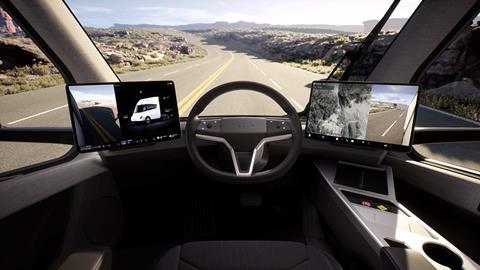 Where the Tesla Semi shines is its on-road performance. For now, the truck comes with a tri-motor set-up and a 1000-volt electrical system for faster charging times. A quad motor set-up promised in 2017 could be offered in the future.

With a maximum load of 82,000 lbs, the Tesla Semi can sprint from 0 to 60 mph in just 20 seconds, while a diesel truck would take about a minute. The claimed range for a fully loaded Semi is 500 miles, at an energy consumption rate of 1.7 kWh per mile, according to CEO Elon Musk’s recent tweet. 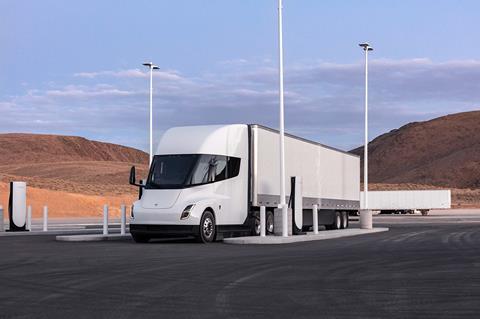 While Tesla does not release battery specifications, we can estimate that the Semi could have roughly 850 kWh of usable battery capacity based on its energy consumption. The brand released a video in December 2022, showcasing the Semi’s range as it drove 500 miles with a near-maximum load of 81,000 lbs using 93% battery.

To charge the Semi’s massive battery, Tesla is building a network of Megachargers in North America. The Semi supports a whopping 1-megawatt charging rate, which can recharge the battery to 70% in just 30 minutes.

Tesla manufactures the Semi at a facility near the Giga Nevada battery plant. However, the brand has yet to ramp up production. Tesla Chair Robyn Denholm said in November 2022 that only 100 units were scheduled for production in 2022, according to The Wall Street Journal’s  report. In the future, Tesla will shift the Semi’s production to Giga Texas.

The brand had opened Semi orders for U.K. customers in early 2022, but there’s no update on how different the Euro-spec truck will be, or when deliveries would begin.

Suvrat KothariSuvrat Kothari is a bonafide petrolhead who has covered the global automotive industry since 2018. As a former Senior Correspondent at a regional Evo magazine, he drove thousands of miles reviewing automobiles and has published over 150 articles across platforms. Currently, he is based out of the U.S. and is turbocharging his reporting skills at New York University's Journalism school.