Amonia has now joined the mix as a potential fuel for long-haul freight operations with the news Amogy has completed initial testing of the world’s first ammonia-powered, zero-emission tractor unit.

Amogy, a pioneer in emission-free, energy-dense ammonia power systems, has developed its ammonia-to-power technology to fuel a 300kW tractor unit in the US. This follows initial trials of a 5kW drone in July 2021 and a 100kW John Deere tractor in May 2022 using the new technology. The truck took eight-minutes to fuel and was tested for several hours on the Stony Brook University campus in New York, with 900kWh of total stored net electric energy. The Amogy team will conduct full-scale testing on a test track later this month to demonstrate the truck’s capabilities under various real-world operating situations.

Amogy’s ammonia-to-power system can enable the industry’s transition away from diesel-powered engines and to alternative fuel-to-power technologies. 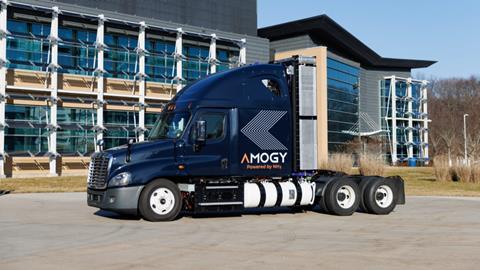 Amogy’s patented technology allows for the on-board cracking of ammonia into hydrogen, which is then fed straight into a fuel cell to power the vehicle. Because liquid ammonia has a higher energy density than compressed hydrogen and takes less energy to store and transport, it has the potential to offer a cheaper solution for long-haul transportation. Ammonia is already a worldwide product, with 200 million tonnes manufactured and transported each year, making it a suitable and accessible alternative fuel.

“Beyond its incredible energy-density and liquid phase at an ambient temperature, ammonia is an optimal fuel to achieve rapid decarbonisation of heavy transportations because it is available globally with existing infrastructure already in place,” said Seonghoon Woo, Chief Executive Officer at Amogy. “This achievement not only showcases Amogy’s technology as an accessible and scalable solution for trucking, it also highlights the capabilities and dedication of our outstanding team. First it was an ammonia-powered drone, then a tractor and now a truck. In the near future, we look forward to further scaling and tackling other hard-to-abate sectors, such as global shipping.”

Following the success of this freight truck testing, Amogy will explore strategic collaborations in the worldwide shipping and transportation industry. Amogy is making significant progress toward its target of lowering more than 5 billion metric tonnes of CO2-eq emissions by 2040, with multiple successful technological demonstrations completed and a dual presence in the United States and Europe.