Terberg's hydrogen-powered shunter truck to be trialled at Immingham Port

Immingham Port is the first port in the UK to start trialling a hydrogen fuel cell shunter truck. The pilot study, part of a government programme, is using a Terberg fuel cell electric vehicle, the YT203-H2, developed through a collaboration between Terberg and Dutch fuel cell specialists Zepp.Solutions. The vehicle has been on trial at the Port of Rotterdam and Antwerp at the end of last year.

The hydrogen fuel cell generates electricity through the reaction of hydrogen and oxygen, with the only emission being water. The hydrogen will be stored in gaseous form under high pressure, enabling quick refuelling and long operation. Associated British Ports (ABP), the owners of Immingham Port, has installed a mobile hydrogen re-fuelling station to support the trials. 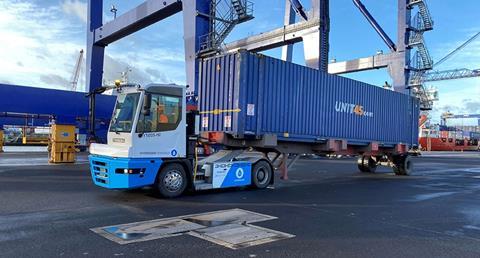 “Decarbonising the maritime sector goes beyond cutting emissions at sea, and this trial demonstrates that hydrogen will play a significant part in UK’s port operations and shed their dependence on fossil fuels,” she said.

Simon Bird, ABP’s Regional Director of the Humber ports said he hoped the trial would show “how forward thinking we are in meeting the need to de-carbonise in the port”.

The announcement of the pilot project, comes ahead of the launch, on 09 January, of a public consultation into the first large scale, green hydrogen production facility being sited at Immingham Port in a partnership between Air Products and ABP.

Plans for green hydrogen partnership were released in August 2022 and local residents and other key stakeholders will now have their say on the proposals - the consultation ends on 20 February.

A new jetty will be built as part of the proposed facility to receive ammonia imports which will be stored and processed to produce green hydrogen. The UK Government has plans for 10GW of low-carbon hydrogen to be in production or construction by 2030, says the joint announcement released by the companies in August. Currently there is no significant domestic production of such hydrogen in the UK.  Air Products, as a first mover, aims to help drive progress towards the Government’s targets, addressing the urgent task of decarbonising hard-to-abate sectors, and reduce the UK’s dependency on fossil fuels, the statement adds.

ABP and Air Products claims the new facility will create 1,400 new direct jobs in the Immingham area, including around 650 in building the facility and a further 750 ongoing jobs in its operation and maintenance. They say at least another 1,600 jobs would be created in the supply chain.

“Globally Air Products supports the energy transition by developing real, first-mover projects. We are forging sustainable hydrogen supply chains with our partners and using our hydrogen knowledge and expertise to accelerate the energy transition,” said Ivo Bols, Air Products’ President, Europe and Africa in the statement. “We are in positive talks with government ministers and officials about our plans to invest in UK green hydrogen. To enable our investment decision, we are seeking some policy assurances that a viable market will exist for our product.”

“ABP and the Humber are at the epicentre of the decarbonisation agenda and we are delighted to work with Air Products on this project, which will help deliver the UK’s legal obligation to be net zero by 2050,” added Henrik L. Pedersen, ABP’s Chief Executive Officer. “ABP’s ports are a vital part of the UK’s energy transition, and we are making significant investments to support a range of renewable energy generation projects, including the expansion of Green Port Hull and the transformation of Port Talbot to help deliver the UK’s ambition for floating offshore wind in the Celtic Sea.”

Andy SalterAndy Salter has spent most of his 30-year working life in and around the commercial vehicle and road freight sector building up a depth of knowledge and expertise. A former editor of TRUCK and Commercial Motor magazines, Andy is a previous Chair of the International Truck of the Year jury and is now managing director of DVV Media International the owner of Freight Carbon Zero. He is passionate about helping the industry prepare for a carbon zero future.