In announcing the opening of a consultation to charge Euro VI vehicles over 12-tonne GVW for entering its clean air zone, Bath and North East Somerset Council (BNESC) has signalled its intent to drive a shift to low and zero-emission vehicles. The decision to open the consultation was agreed at a BNESC cabinet meeting on 10 November 2022 and parties will be encouraged to submit feedback when the formal process opens shortly. Bath launched its Clean Air Zone in 2021, since which time operators of pre-Euro VI HGVs and buses have been liable to £100 daily fines. 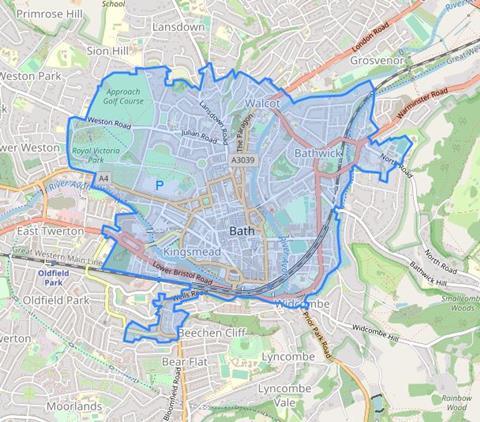 A proposal by Bath council to charge heavier Euro VI compliant trucks entering the clean air zone intends to force operators to re-route trucks around, and re-think deliveries into the city centre

According to the proposal from BNESC, the charge is deliberately set lower than the existing HGV charge to deter the use of older, more polluting vehicles and is intended to support the Council’s aim of going further to improve local air quality, reduce vehicular demand on road space, protect the amenity of the Bath World Heritage Site setting. For the avoidance of doubt, HGVs weighing under 12 tonnes would be unaffected by this variation, says the proposal.

The Council recognises the considerable fleet improvements already made by owners and operators and is proposing those who have recently invested in Class N3 Euro VI diesel HGVs, would be granted time-limited local exemptions and a period of soft enforcement. Subject to the outcome of the consultation, exemptions are being considered for vehicles based in and around Bath, and for vehicles delivering to/from locations within the charging scheme area. These exemptions would complement the existing exemptions for hybrid, electric and alternatively fuelled vehicles.

The Road Haulage Association (RHA) has called the move premature, saying hauliers will struggle to find expensive new trucks since the market cannot currently sustain a large-scale changeover to low- and zero-emission cars. A surge in demand might push costs out of reach of small and medium-sized businesses, and there are widespread concerns about the adequacy of alternative fuel infrastructure. “We share Bath and North East Somerset Council’s ambitions to improve air quality but we have to be realistic about how we try to do it. Simply taxing diesel trucks out of the city is not how to support small businesses through a costly and complex transition to alternative power, nor does it efficiently target the sources of harmful emissions.” said Chris Ashley, RHA Policy Lead, Environment and Vehicles.“We’re ready to work with councillors on realistic, sustainable ways of reducing congestion and improving air quality in the city.”