Amazon is planning to expand its UK fleet of electric HGVs to 700 trucks as part of a €1bn (£1.14bn) five-year investment programme aimed at electrifying its European transportation network.

As part of a global €1bn global investment in carbon zero trucks, Amazon has announced it will spend £300m in the UK expanding its fleet of electric trucks, currently consisting of five vehicles, as well as boosting its electric van and eCargo bike fleets and rolling out a fast charging infrastructure. 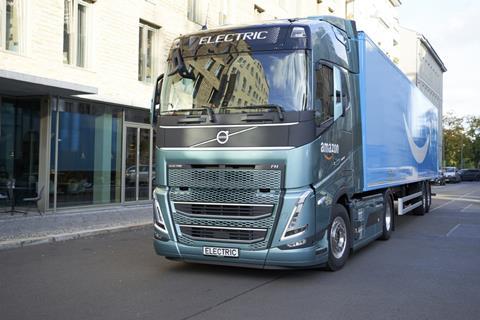 In a statement announcing the investment programme the online retailer said: “Amazon is using its size and scale to help spark the scaling of eHGV production so Amazon and others can more quickly transition away from diesel trucks. With the investment, Amazon expects to purchase and roll out more than 1,500 eHGVs in its European fleet, including more than 700 in the UK in the coming years.”

To power its eHGVs, Amazon will build hundreds of specialised fast chargers across its European facilities, allowing the company to charge the vehicles in approximately two hours. The investment will also allow the company and its partners to improve fleet charging hardware.

The e-commerce giant is hoping its investment programme will drive innovation across the industry and encourage the roll out of more public charging infrastructure and accelerate its progress toward becoming net-zero carbon by 2040 - 10 years ahead of the Paris Agreement.

Amazon’s fleet of electric vans will also be boosted significantly. It currently has more than 3,000 electric vans operating across Europe and, with this latest investment, expects to grow its fleet to more than 10,000 by 2025. The expansion plans will also drive an increase in Amazon’s micromobility hubs in more than 20 cities across Europe, including London, rising to 40 cities by the end of 2025. These smaller, centrally-located delivery stations will allow Amazon to operate new delivery methods, such as e-cargo bikes and on-foot deliveries.

The investment plan signals Amazon’s intent to power its operations, including data centres, logistics facilities, physical stores, and corporate offices and charging points, with 100% renewable energy by 2025, which was already at 85% in 2021. Amazon currently has more than 100 renewable energy projects across Europe, including 30 on-site solar and off-site utility-scale solar or wind farm projects in the UK. 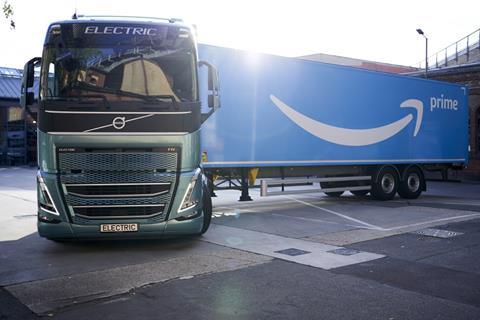 “Our transportation network is one of the most challenging areas of our business to decarbonise, and to achieve net-zero carbon will require a substantial and sustained investment. Deploying thousands of electric vans, long-haul trucks and bikes will help us shift further away from traditional fossil fuels — and hopefully further encourage transportation and automotive industries in Europe and around the world to continue scaling and innovating, as we will have to work together to reach our climate goals.” said Andy Jassy, Amazon chief executive.

UK Secretary of State for Transport, Anne-Marie Trevelyan, welcomed Amazon’s investment plans. “We are committed to creating cleaner transport as we work to tackle the global challenge that is climate change.” she said. “Significant investments like Amazon’s today will be vital to reducing emissions and meeting our Net Zero goals, while supporting growth at the same time. By adding thousands of electric and zero emission vehicles to its fleet, Amazon is not only working to make their deliveries more sustainable, but also stimulating innovation across industry in the drive to cleaner transport.”