In this interview, which first appeared in Commercial Motor magazine, Daimler Truck tech expert Dr Andreas Gorbach, discusses strategy and the importance of partnerships to ensure the successful future development of battery and hydrogen fuels.

Daimler Truck has announced a dual strategy approach to alternative fuels, whereby in addition to diesel-powered vehicles, it will also offer customers a choice of battery-electric and hydrogen fuel cell trucks. In order to find out more about its route to decarbonisation, Commercial Motor joined a round-table discussion with Dr Andreas Gorbach, Daimler Truck’s technology group manager at IAA Transportation 2022 in Hanover.

CM: You have announced that the eActros LongHaul will use lithium iron phosphate (LFP) batteries. In the car world these batteries are considered to be the entry-level product, as they’re heavier, cheaper and don’t contain as much energy. Why are you using them?

AG: We think LFP is the right solution for trucks, where the important thing is lifetime. For a passenger car, after 150,000km the battery could be at the end of its life, but we need more than 1 million km for trucks. LFP is the correct choice where you have lots of cycles of charging and discharging. At the same time there is the advantage that they have no nickel or cobalt, which is not only better from a cost perspective, but also from a geopolitical one.

The only disadvantage of LFP is it has a slightly lower energy density. This is why NMC batteries are better suited to passenger cars, which have limited packaging space. However we have found a way, and our LFP batteries have improved energy density, but still have the advantages of a long lifetime, lower cost and less geopolitical implications. We are able to package more than 600kWh, which is good for 500km. This is sufficient, because if you need a longer range, hydrogen is the better solution. I wouldn’t push for an 800km or 1,000km range in a battery electric truck, as this can be done way better with hydrogen.

CM: How far are we from a true battery breakthrough, which would allow batteries to be legitimate for long-haul trucks?

AG: I hear those voices, but personally I don’t see it, because there is a limit. There is a maximum electrochemical difference of all the elements on Earth, and this is the limit. The biggest differences in electrochemical potential give us the highest voltage, and the highest potential energy density cell. It would never come even close to the energy density of hydrogen; 1kg of hydrogen has a usable energy content of 33kWh. On the battery side it is 0.5kWh or 0.6kWh, and if we have a breakthrough, maybe it will reach 1kWh. There are no other elements on Earth to compete with hydrogen. 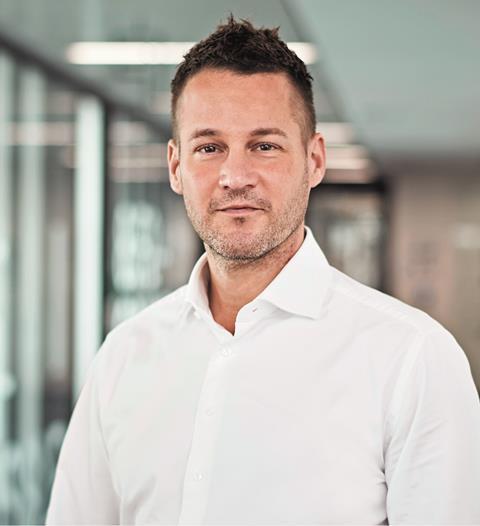 CM: What timescale is Daimler Truck working to regarding the roll-out of zero-tailpipe-emission trucks?

AG: We are now step-by-step electrifying our portfolio, and by 2025 or 2026 we will have all relevant trucks electrified. And then we add hydrogen.

A couple of years ago people looked at us [European truck manufacturers] and said you guys have got to get started, but now the trucking industry will not be the limiting factor any more. From the product side everyone will be there. We will have the flexibility to walk at the same pace as the infrastructure or the TCO case for customers. Speed on the infrastructure side is not fast enough to comply with the Paris Accords. This puts us in a very difficult situation. Let’s imagine it’s 2027 and a dealer wants to sell a battery electric truck. The customer says ‘I can’t buy it because there’s no infrastructure’ and the manufacturer says to the customer ‘I can’t sell you a diesel truck because we cannot pay the penalty [hefty EU fines that will be imposed if truck makers don’t comply with emissions targets]’. Then we get to an awkward situation. We want to be so flexible so that we will never be the bottleneck.

CM: When do you plan to completely eliminate diesel from your product range?

AG: We don’t know, but we are shooting for the year 2039 [for Europe, Japan and the US]. But we cannot answer the question because the decarbonisation speed is not only dependent on our product portfolio, but it will be determined by infrastructure. If there is still one drop of oil below the surface of this planet, and the federation of states which signed the Paris Accords becomes unstable, then those countries will continue [to use diesel]. We can consciously decide not to sell to those countries, but then some other OEM will sell to them. We need a really strong collaboration amongst the states that signed the Paris Accords, and they all need to invest in infrastructure and provide cheap green energy. This is the solution, and this is why it’s difficult to say when we’ll sell the last diesel engine.

CM: Will you be partnering with third parties as you continue to electrify your truck range?

AG: This is a very relevant question. We still have to invest in heavy-duty diesel, because that volume won’t suddenly go down tomorrow, and the regulators are also working on new regulations [Euro-7]. And at the same time we invest in battery electric trucks and hydrogen trucks. This can only be done with partners. We’ve partnered with Volvo on the Cellcentric side, and you will see more and more partnerships to come on the battery side. This is most likely the biggest challenge the industry has ever seen. It’s also the biggest opportunity. It’s a challenge we can only solve together, and we will do it with other volume partners, other OEMs and tier one suppliers.

CM: Will there be a time when you’re partnering with others on diesel technology as well?

AG: The answer is yes. On the medium-duty side, we already did this move. We dis-invested in our own product and went with Cummins. Our volumes are too low, and the decarbonisation speed is higher at this weight compared with heavy-duty. On the heavy-duty side, I’d say we have the best product, and we still have enough volume. This is why we still invest. But we will also partner here [in the future], but it will be based on our technologies. Stay tuned, as it’s not going to take more than half a year before we can announce something. And this is just the first step. We need to keep the volumes high, also for our suppliers, so we need consolidation in the diesel industry.

AG: We are totally monitoring this. I say it is too sexy to look away, and too immature to bet your house on it. All the players are investigating it, as are we on an advanced engineering level.

CM: What is the advantage of burning hydrogen in a combustion engine when it has a bad efficiency?

AG: The efficiency is significantly higher than it was in the past. Hydrogen fuel cells have the best-in-class efficiency at low load. So, if you run a 40-tonne truck on the Autobahn at 80kph, the power needed to propel it is 100kW. A fuel cell has 300kW, so, you’re running at part load. This is super high efficiency which can never be beaten by a hydrogen combustion engine. But if you look at a construction vehicle, where you run full load, the efficiency of the hydrogen combustion engine can be better than the fuel cell. The same applies to off-road vehicles like combine harvesters. So it can play an important role. I do see the potential for this technology, and we are looking at it to find out the potential for our transportation case.

CM: Do you prefer gaseous hydrogen or liquid hydrogen?

However, what is on the market today is grey and compressed. As there is already an infrastructure available, the early adopters of hydrogen are using what is already there. But green hydrogen will come. And in the future I see liquid hydrogen dominating.

If we look at the world today, we are trading with energy. Germany imports 70% of its energy mainly in the form of gas, oil and coal. Now, if we’re going to decarbonise, we have three options. Firstly, we reduce our consumption by 30%, and de-industrialise the country. Second option, we produce the 70% on our own, but we don’t have enough wind and solar. Or we could build 30 of the biggest nuclear power plants. The third option is we import green energy. We have to import it as a molecule, as we cannot trade with electricity on a global scale. So this is why I think, in a hopefully decarbonised world, we will trade with green hydrogen and it will be liquefied. There will be pipelines as well, but generally we will liquify and transport it from places like Australia, Africa and the Middle East. We need to transport green energy as a molecule anyhow.

CM: Daimler, Traton and Volvo have announced a joint venture to build 1,700 green energy charging points in Europe. Will you be looking to do something similar with hydrogen?

AG: We are doing this with electricity because we want to eliminate the chicken and egg problem. While we have some small projects to showcase how it [hydrogen] could work in Europe, we will not be doing the same thing with hydrogen. We do not have the financial power to set up an infrastructure. All the OEMs in the next 20 years together would not have enough money to build an infrastructure. In a similar way we do not build bridges or autobahns.

Will ShiersWill Shiers has held an HGV licence since the age of 21, and has been writing commercial vehicles for the past 25 years. He started his career as technical editor on Motor Transport, before taking on the editorship of Truck & Driver. Since 2011 he has been the editor of industry leading weekly publication Commercial Motor. Will is the UK jury member of the International Truck of the Year.