The International Council on Clean Transportation has published a white paper that gives an overview of alternatives to plug-in charging for battery-electric vehicles, as well as their cost and timescale for deployment.

According to the study, early electric trucks depended on charging infrastructure meant for light-duty vehicles, but more powerful standards are ready for commercialisation and will open up new uses. In Europe and North America, wired stationary charging is now the dominating technique. By allowing for smaller battery capacities, battery swapping, overhead catenary charging, and in-road wireless charging might minimise charge downtime and upfront vehicle expenses. However, the adoption of these technologies is hampered by political and business constraints.

Instead of plugging in to charge, battery swapping entails replacing a depleted electric vehicle battery with a fully charged one. 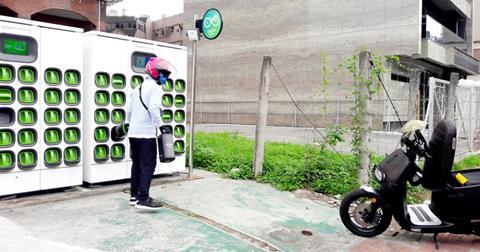 China has been in the forefront of promoting battery swapping technologies in recent years. Currently, the batteries used by various firms vary in shape and size and are installed in the vehicle in various distinct approaches. As a result, drivers of vehicles that support battery switching may often only utilise specified battery swapping stations. According to recent statistics from China, the capital cost of a typical battery switching station for heavy-duty vehicles is more than $1.5 million, which is significantly more than the capital cost of a plug-in charging station with comparable service capacity.

Battery switching is commonly provided in China through a battery-as-a-service (BaaS) business model. Instead of plugging in to charge, battery swapping entails replacing a depleted electric battery with a fully charged one. When purchasing electric trucks, fleet owners just pay for the vehicle body (without batteries), resulting in a lower upfront cost, while battery switching station operators purchase and offer fleet owners with access to fully charged batteries. By the end of 2021, China has established at least 1,298 battery switching stations, the majority of which are utilised to serve electric passenger vehicles such as taxis and private automobiles.

There have been few tests with battery changing technologies outside of China. Early commercial initiatives to encourage battery switching by Better Place and Tesla failed due to high capital costs and poor user demand. As a result, talks of battery swapping died out in Europe and the United States.

Overhead catenary charging enables trucks to charge while travelling by passing power through a pantograph attached to an overhead contact line. 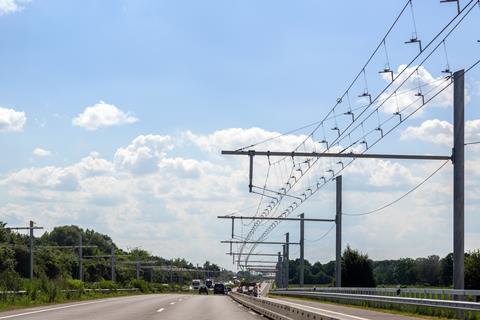 Catenary technology is a solution that continues to be discussed with some dismissing it as a fantastical proposal and others believing it to have actual potential for success. Catenary charging combines the advantages of efficient energy supply through catenary wires when travelling on important routes (mostly motorways), lower initial investment costs for trucking companies due to smaller batteries, and shorter charging downtime.

The Centre for Sustainable Road Freight issued research in 2020 that analysed the possibilities of deploying this technology in the UK. According to the research, installing an overhead catenary cable network over 7,500km of the UK’s major road network would electrify about 65% of kilometres traversed by heavy goods trucks at an estimated cost of £19.3 billion and might be completed by the late 2030s. This analysis also revealed investments for vehicle owners will be repaid in 18 months through decreased energy prices and in 15 years for catenary line infrastructure investors through increased power sales profit margins.

Wireless in-road charging works by transferring electricity from magnetic coils embedded in the road to receiving coils fitted to electric vehicles. Like overhead catenary charging, it allows electric trucks to charge while driving.

Thus, this technology has the potential to reduce range anxiety and lower the upfront cost of owning an electric truck by reducing battery size. In addition, wireless in-road charging has one key advantage over overhead catenary charging: it can be used by both trucks and cars, which increases the use case. 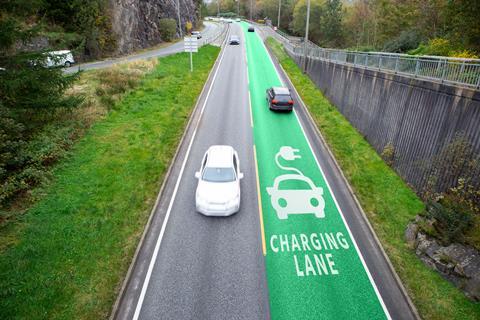 However, the report points out that this unique technique has significant drawbacks. The first hindrance is the expensive cost of building electrified highways, as well as the related political and financial impediments, with a wireless charging road costing around $1.2m per kilometre. Furthermore, the consequences of high-energy wireless charging radiation on humans and animals are unclear at this time. Another issue, particularly for tractor-trailers, is the restricted space on tractor units for installing coils capable of receiving enough inductive power to drive vehicles with high gross vehicle weights.

Entering into 2023 one thing is certain, carbon zero commercial vehicle infrastructure needs to migrate away from theoretical proposals and translate into tangible investmet discissions. The same solutions continue to circulate in discsussions and the time for commital is fast approaching.